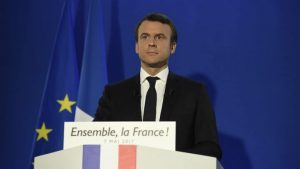 Even if the newspapers say it is.

President Macron – of France was elected yesterday. Earlier his emails were leaked and showed that he had signed an operating agreement with an LLC in Nevis. This means he was an owner of an offshore company in Nevis (insert exaggerated gasp from the general public!)

Online media and Newspapers have attacked him saying that:

Documents Indicate That Emmanuel Macron May Be Engaging In Tax Evasion

Documents leaked online today appear to show that French Presidential Candidate Emmanuel Macron entered into an operating agreement for a Limited Liability Company (LLC) in the Caribbean island of Nevis… and that the company may have had a business relationship with a bank which has been previously involved in tax evasion cases in the Cayman Islands. Macron claimed he was not concealing assets or holding secret offshore accounts less than a month ago.

The first document is an operating agreement drawn up on May 4th, 2012 to form “La Providence LLC” under the 1995 Nevis Limited Liability Company Ordinance bearing Mr. Macron’s name and signature. La Providence is the name of Macron’s former high school in Amiens, where he first met his wife. The decision to form a company in Nevis is suspect, as the Nevis Confidential Relationship Act prohibits the disclosure of information and guarantees the secrecy and privacy of offshore LLCs in Nevis. Information about company owners is not published nor is it available to the public.

Well firstly – that owning an LLC offshore does not matter in the greater public opinion, even in the most hotly contested presidential race in 2017, in France, where numerous parties vie for the leadership role.

Secondly – if you are going to be private, perhaps don’t name your entity after the place where you went to high school. Be smart and pick an obscure, shelf company like name which can’t be tied to you (unless you for some reason want it to be). But if it’s just a holding company for personal investment assets (as it looks like in the case of Macron), then don’t name it after your high school. Especially if you are like Macron and you ended up marrying your high school teacher.

Thirdly, as is noted in the article – Offshore LLC’s in Nevis are protected from the general public. However, due to CRS and AEOI disclosures, the information on the accounts may be shared with governments starting in 2018. Again – LLC’s in Nevis are 100% legitimate, useful operating entities.

We employ them when we need an entity with strong asset protection, and oftentimes when there is a sole owner. This is because IBC’s (international business companies) do not have the same protection for single owners. Overall LLC’s are more flexible than IBC’s and generally easier to use in a holistic wealth planning activity. In any event – a perfectly legal use of an offshore entity by a prominent member of the public.

It’s almost as if the newspapers want to demonize this normal activity, so that you, the normal hard working entrepreneur – assume that this is illegal.